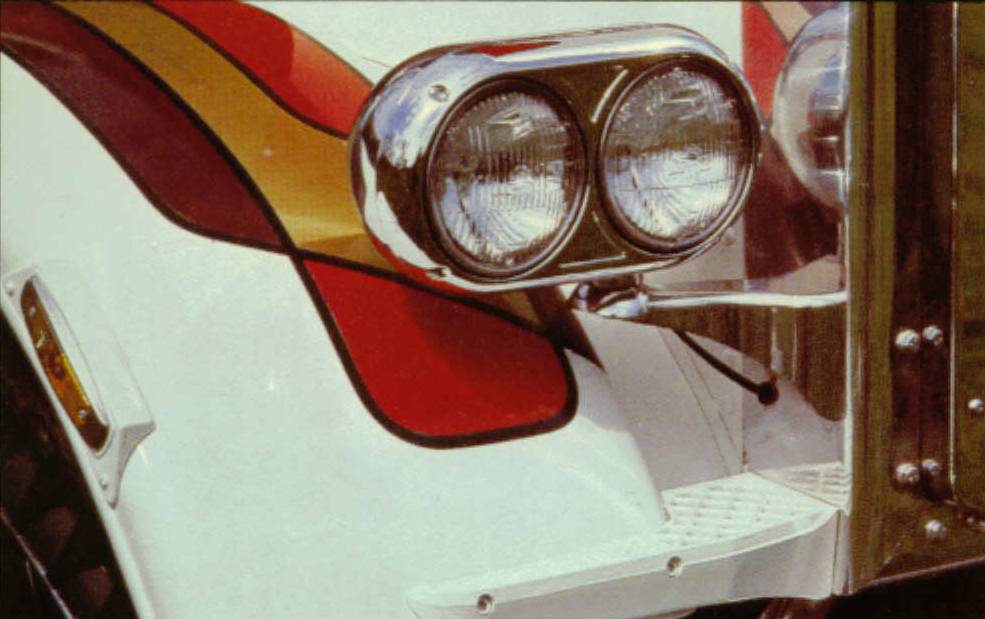 The model 351 replaced the 350 series with a new style hood, radiator assembly, fenders, battery box, headlamp mounts and bumper.       The early 351's had wide rubber windshield gaskets, a carry over from the 350 series.  This was replaced by smaller rubber.  Early 351 butterfly hoods had shorted hood side and a ledge panel that the hood sat on.  The hood hold-downs attached here. Later hoods had a full size side panel with a smaller hood ledge just above the frame rail.  351 was built until 1976. 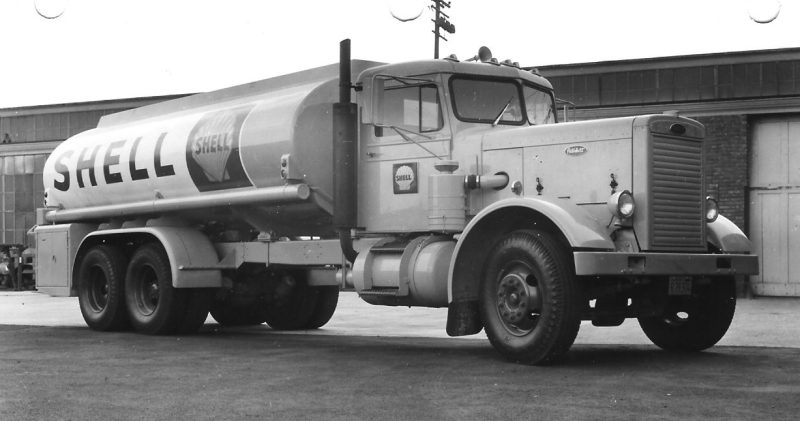 Note the hood ledge on the lower hood side, the tapered frame rails and the art-deco crown ornament.  351 bumpers had wide-set tow-pin locations, the headlamps mounted to the rear of the radiator and were set back from the face of the radiator. 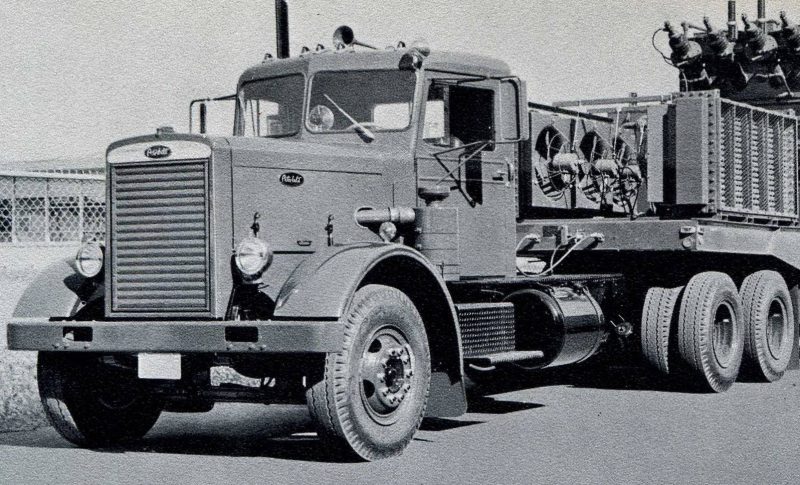 On some 351's a "blister" or bump-out can be seen on the right side of the hood panel.  This is to allow clearance of the turbocharger. 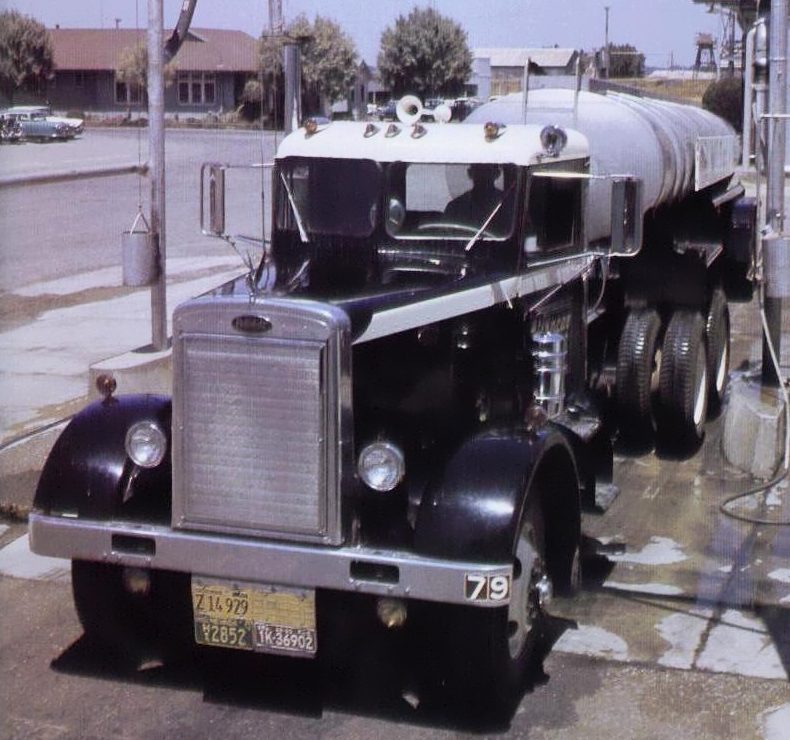 This sharp black and white 351 has an option bug screen.  Note the painted air horn. Painted horns, roof lights, handles and mirrors were standard at one time.  The swan hood ornament was a customer add-on. 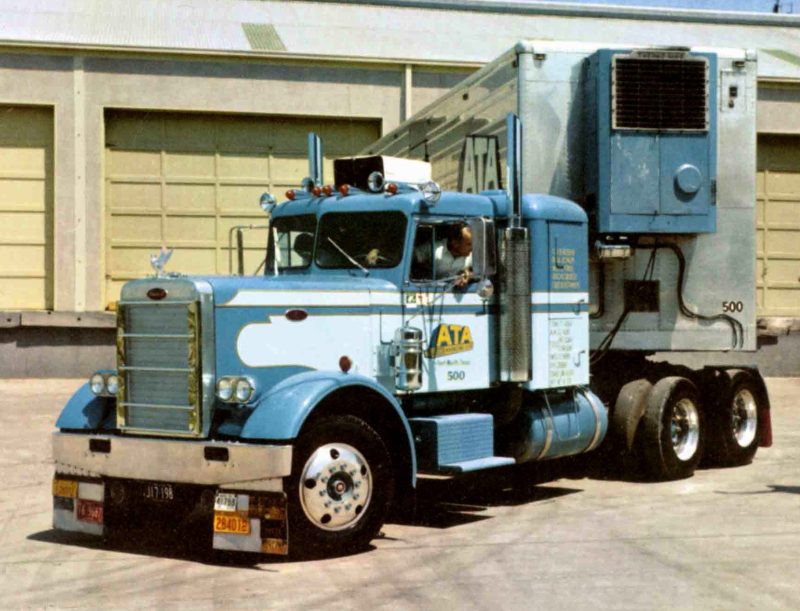 This 351 features a 36" sleeper, the horizontal bar grille option, quad headlamps and plenty of polished items. 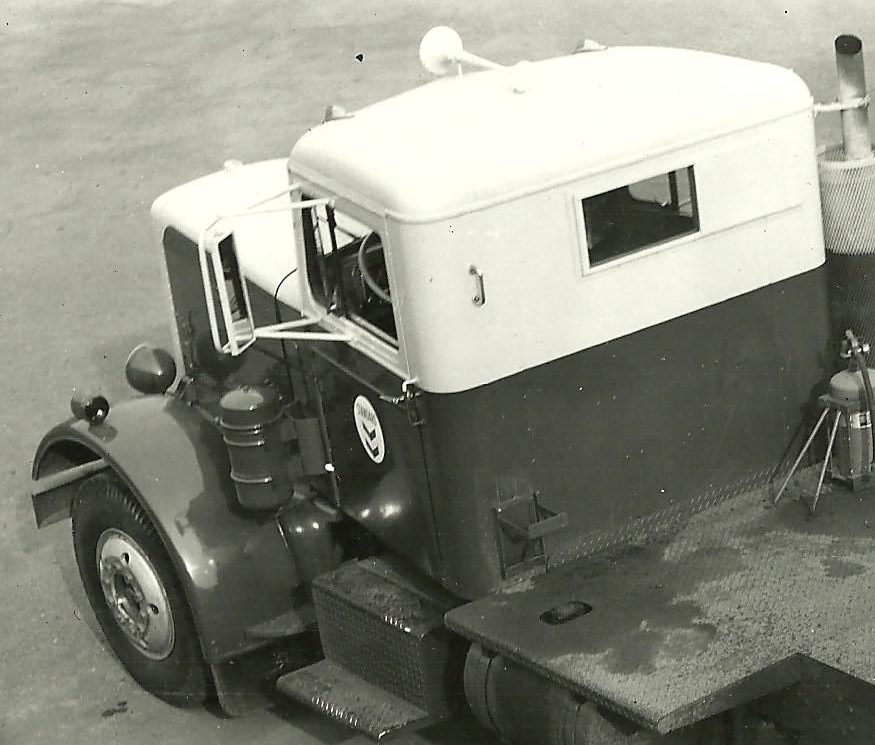 This view shows the pre 1960 cab.  Note the slider rear window, the drip rail that surrounds the roof of the cab.  The rear of fender step is clearly visible as is the headlamp mount. 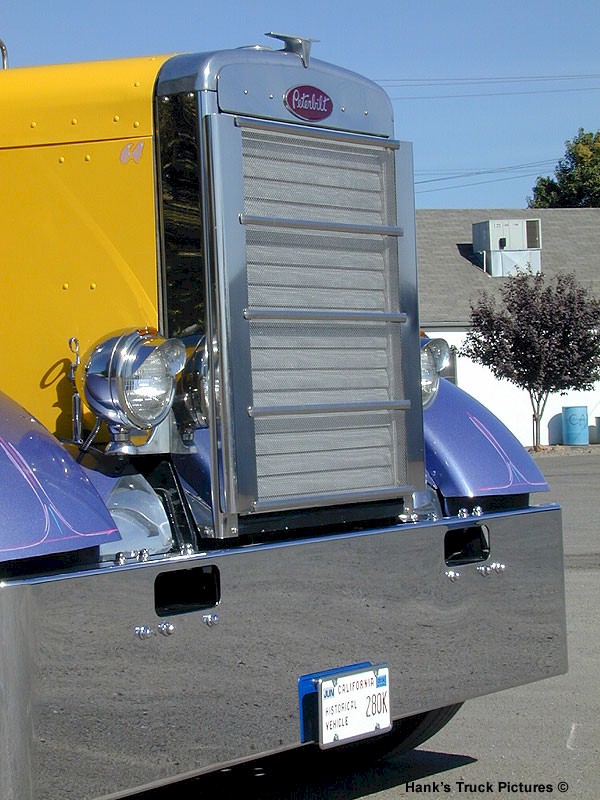 This is an optional 351 grille screen.  Note that the crown ornament is now the bird in flight.  The ornament debuted in 1965 with the tilt hood model 358. The Bird appeared on the 351 in the late 60s.  Many 351's were converted to tilt hoods (becoming 358) with a dealer-ordered conversion. Photo courtesy of Hank Suderman 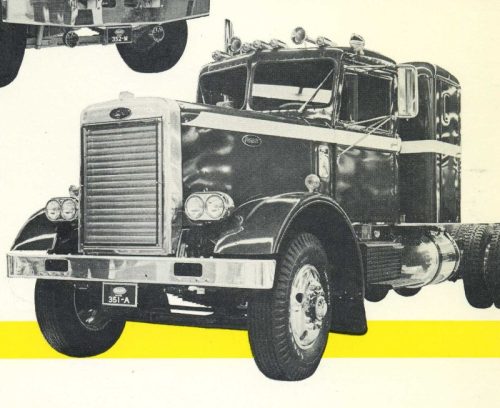 This 351 features quad headlamps, a 36" sleeper and several polished items. The Peterbilt sleeper sported a raised stylized version of the bird crown ornament on the outer corners of the roof. This feature lasted until 1979.  Peterbilts featured tapered front rails which were phased out in 1966, and the rear taper was phased out by 1971. After that all models had had straight rails that were rolled instead of stamped. 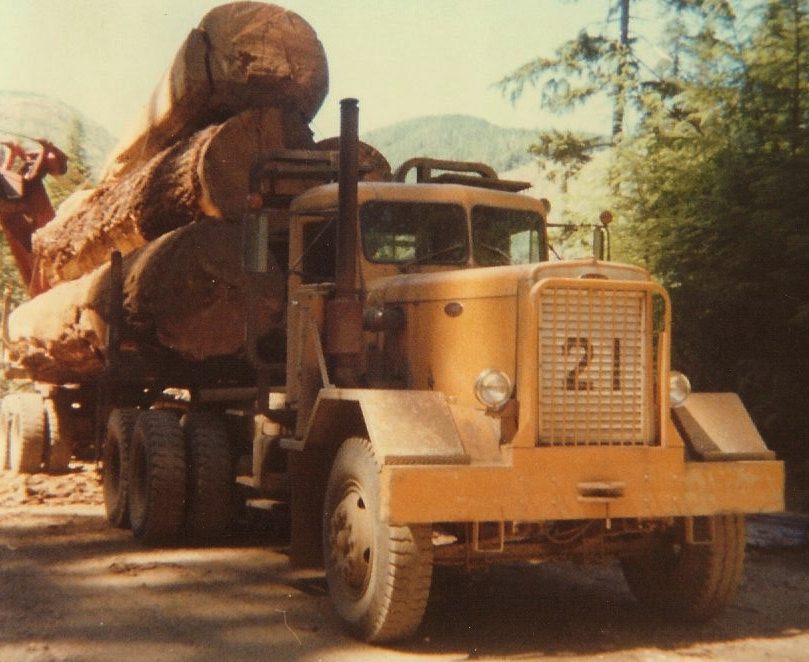 The 351L had the radiator of the 351 and the aluminum diamond plate fenders similar to the 383 and 38's steel fenders..  Engineered for logging. Photographer Unknown 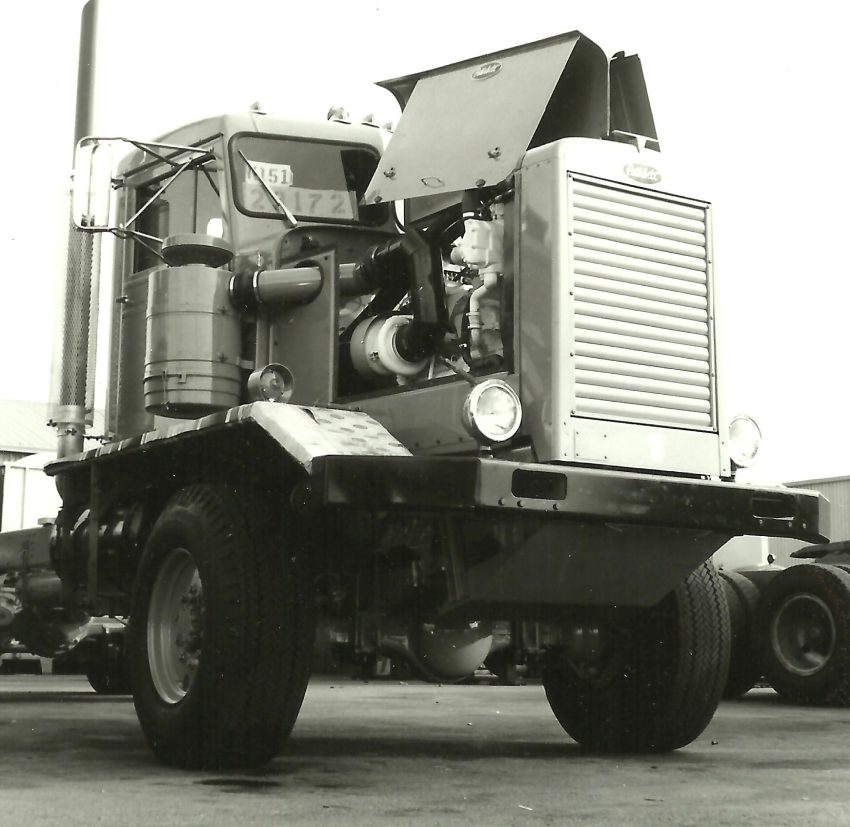 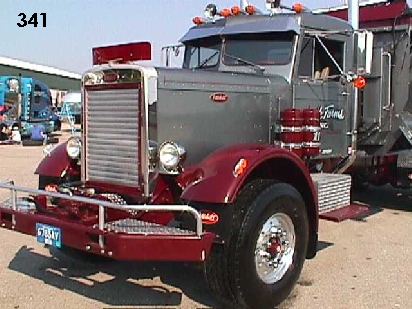 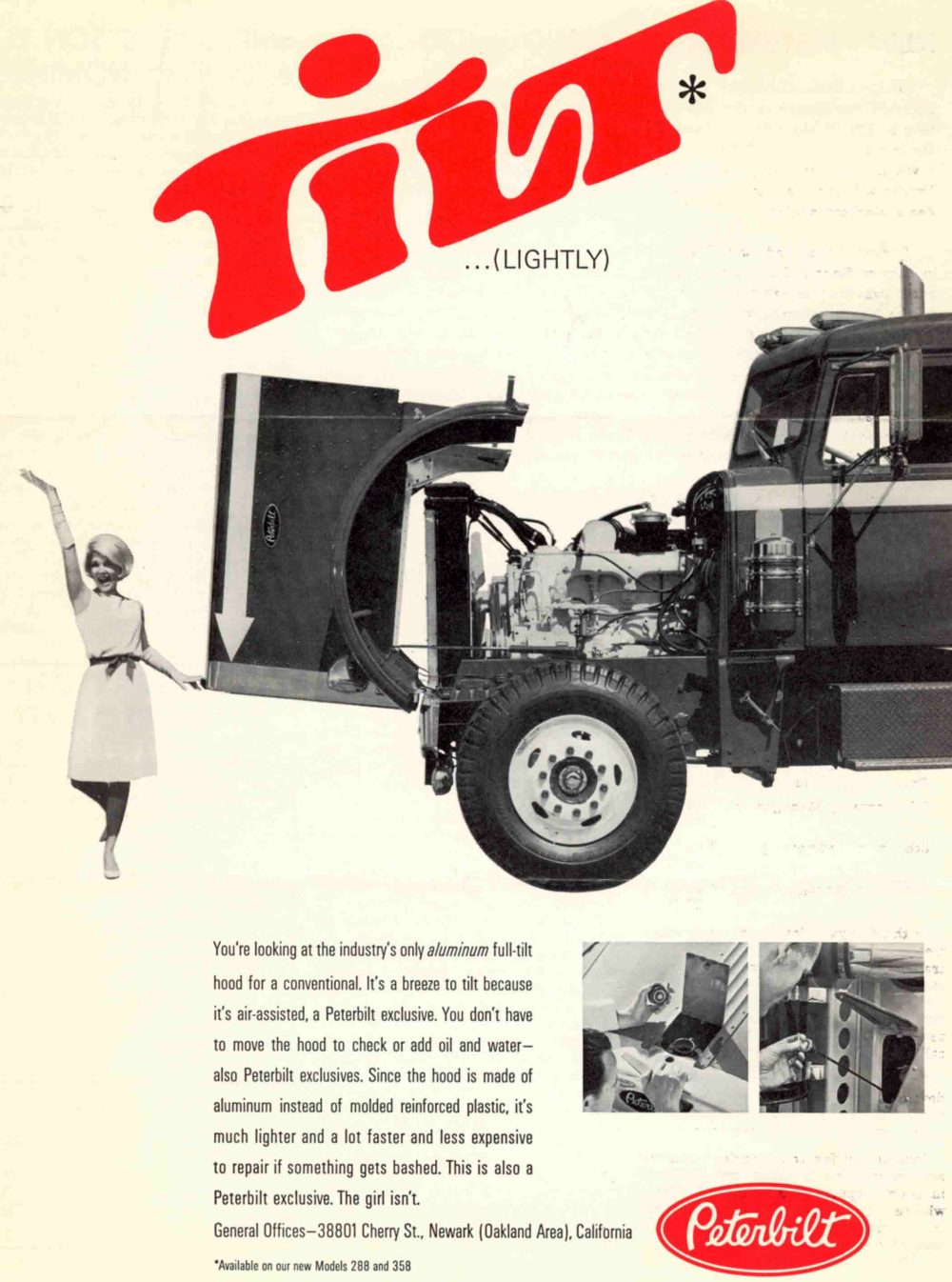 The model 358 was developed in 1965 and was the first Peterbilt tilt hood. The 358 was a 351 with a tilting hood. The grille shell attached to the hood cleared the radiator where the radiator was the grille on  351. 358 was available only as a 119" BBC.  Aluminum at first and a fiberglass hood was available later.  Note the location of the headlamp mounts and the headlamp bracket was "right-side-up" were 351 had the headlamp tucked into the bracket.  The Bird hood ornament debuted with 358. The painted metal air cleaner intake tube was redesigned for 1966 as a rubber hose.   358 was built until 1976. 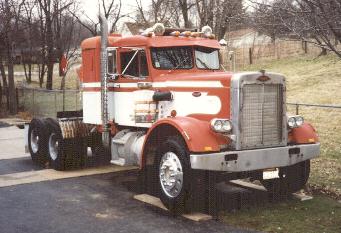 Dan Bruno's 358 has the newer style corner fender lights. (see notation under 359) Note that this 358 has the rounded grille screen opening.  This is a fiberglass hood.  Photo courtesy of Dan Bruno 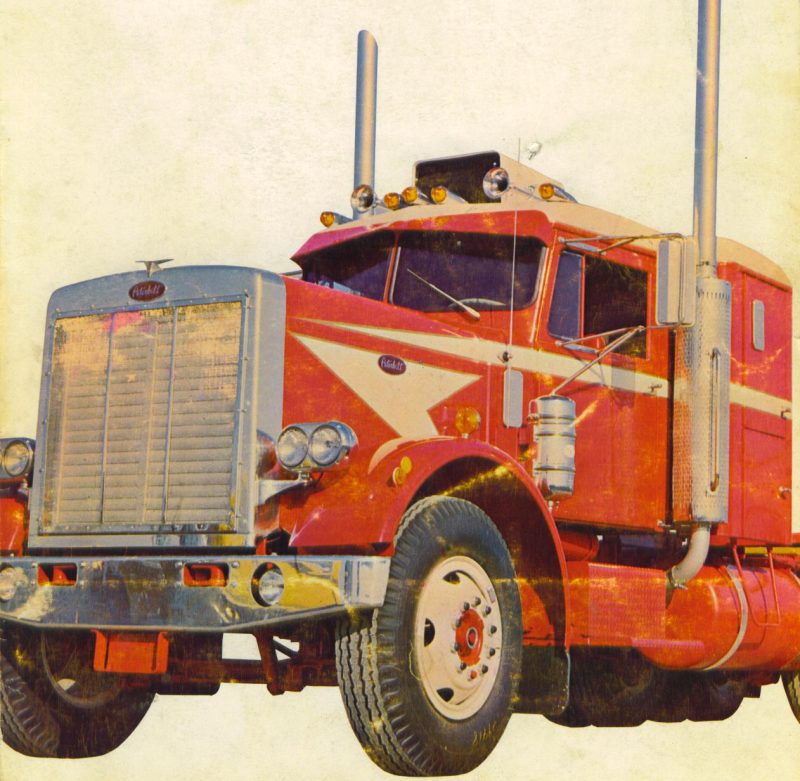 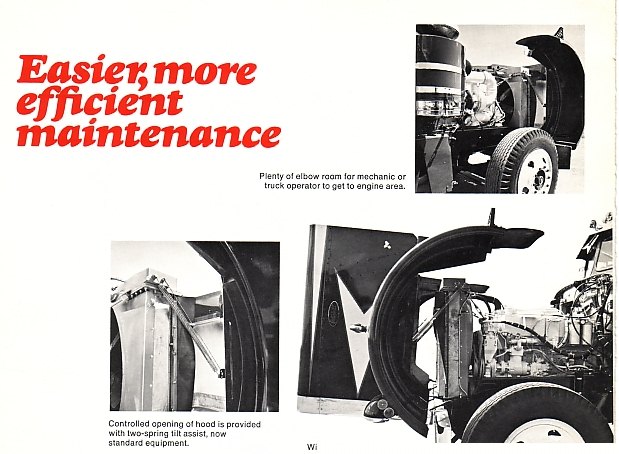 In 1967 the model 359 was introduced.  The 359 shared many of the styling cues of the 358 tilt hood.  The first 359's had a 2-bar grille screen to downplay the width of the hood.  The 2-bar screen was replaced by the 3-bar screen in the late 60s.  Note that the tow pin openings in the bumper are now mounted center on the rails where 351 had them outboard.  The 359 radiator was 1444 square inches.  359 fenders had small triangular shaped steps mounted outboard on the rear of the fenders to allow the driver to step up to clean the windshield.  351 had steps that were inboard on the fender and attached from the fender to the stepboard skirt (what some call the lower cab extension panel). 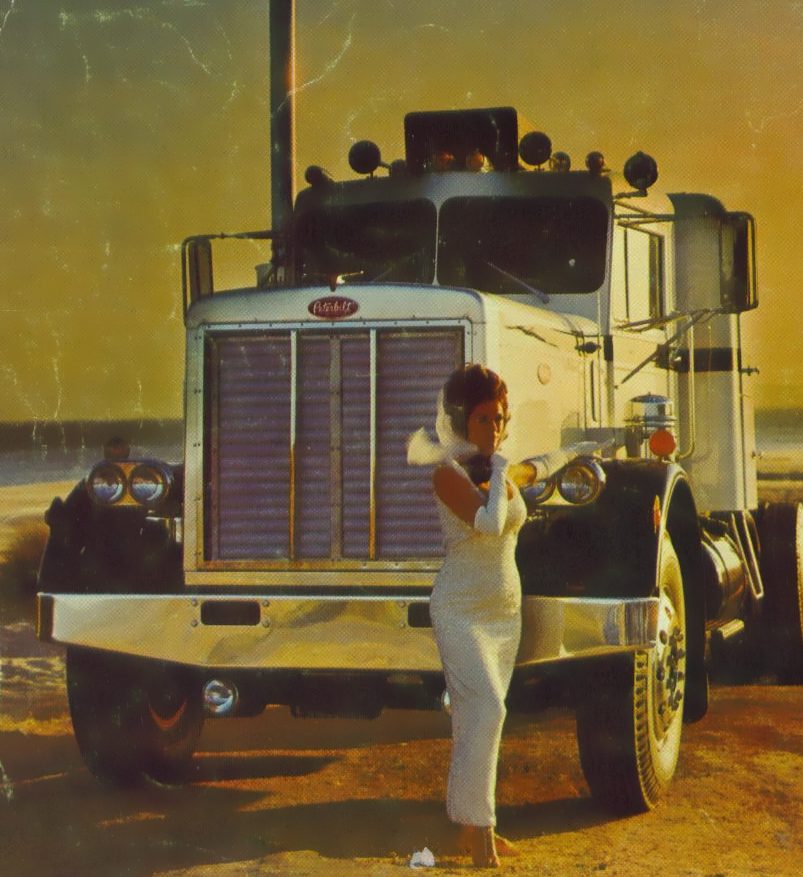 Peterbilt mirrors were had a diagonal brace from the mirror arm down to the door.  This brace was mounted from the mirror arm to the top of the door on the side where the air cleaner was mounted.  Note the fender mounted reflector and light.  The '68-73 models had this stand-up style light.  After '73 a sleek low-profile style lamp from the 358 fiberglass hood was used. 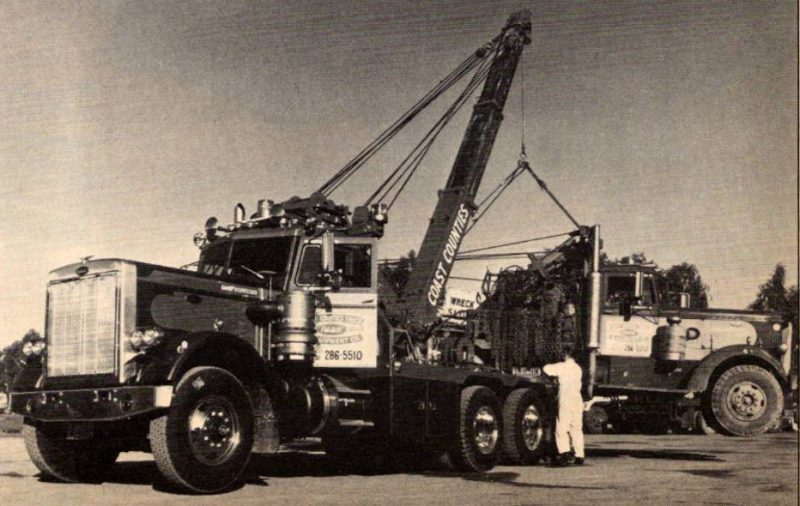 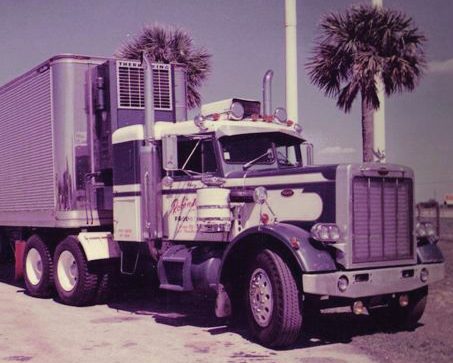 This 359 has the 3-bar grille.  Note that there are no visible forward brackets on the front of the fenders, also note the red mudflaps, common on Peterbilts in the late 60's and early 70's.  Photo courtesy of Robby Gaines 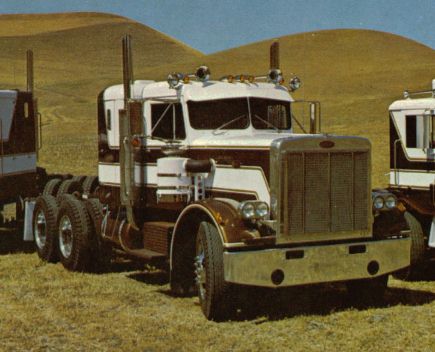 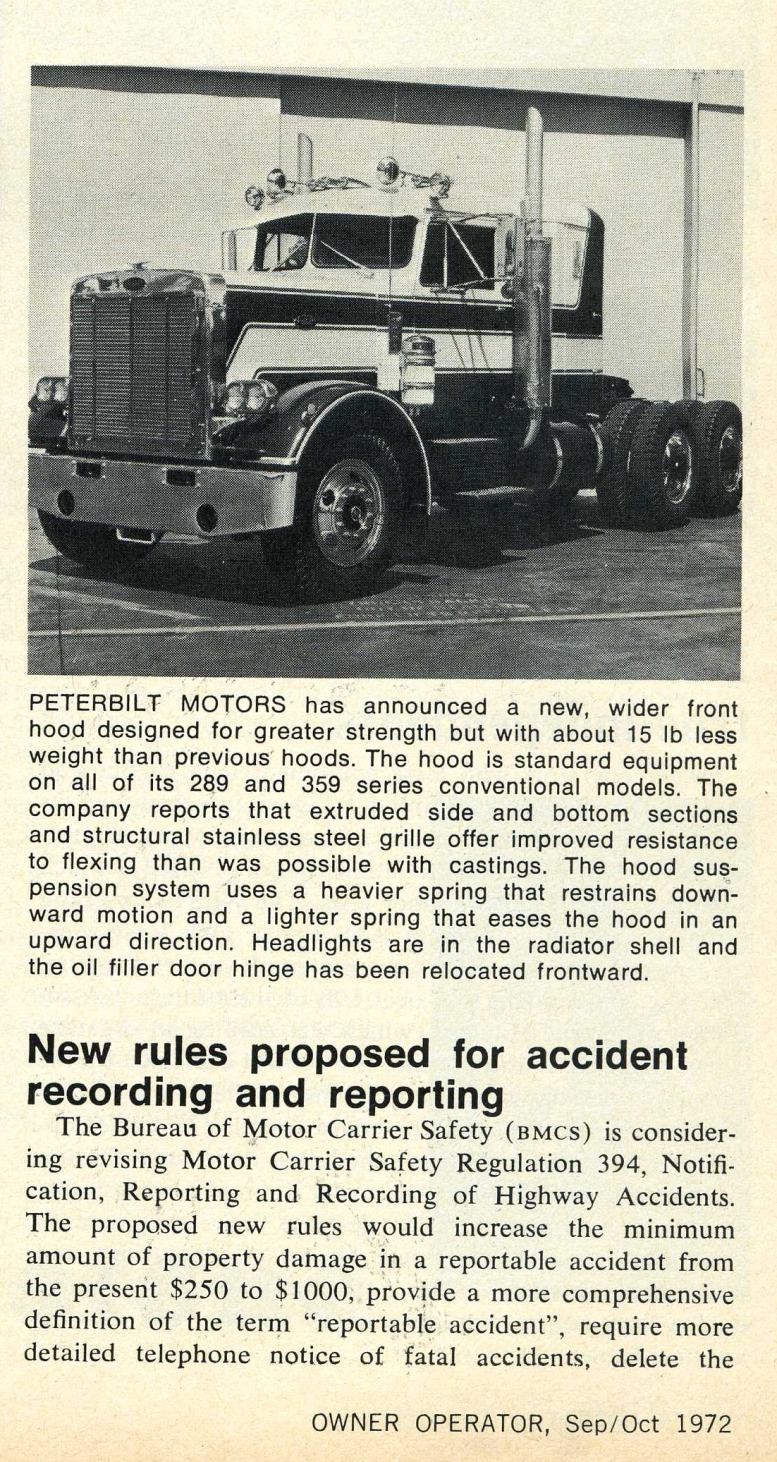 1972 saw a new hood for the 359.  The hood was engineered differently, had new panels, a new grille and crown and visible brackets on the front of the fenders.  The new hood is identifiable by the location of the seam between the crown and sides of the radiator surround - the old hood had the seam several inches higher up, the new hood has the seam at the same level as the panel joint on the hood skin.  This hood carried over to the 1100 series cabs in late 1972.  This 359 has the air conditioning condenser build onto the grille shell.  Some called this a "wide mouth 359."  Most 359's had roof mounted air conditioner units.  359 was available in 119" and after 1969 127" BBC lengths.  A fiberglass 119" hood was available after 1973.  359 hoods featured a flip-up radiator cap access door and an engine oil dipstick door on the right side of the hood on early versions (until the late 70s). 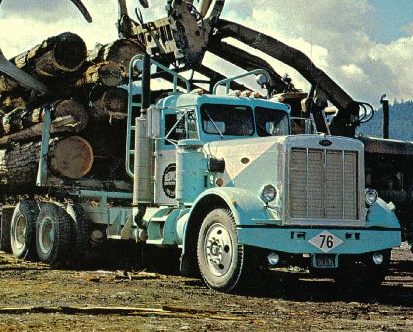 This 359 has the new hood from 1972, note the rounded corners of the bug screen, the panel seam on the crown sides at the same location as the hood ledge and the front of fender brackets.   Photo courtesy of JB Selvidge 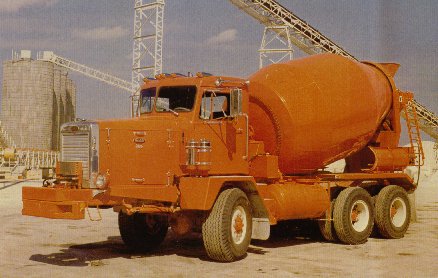 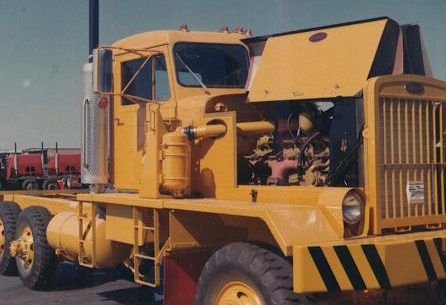 Probably the rarest of Peterbilts, the model 343 was a 6x6 chassis, open cab and hood built for export to the Philippines.  The photo above also clearly shows the tapered frame rails.

In 1972 a new cab replaced the unilite cab.  The new cab was not only taller, but had larger glass, bulkhead style doors and a new interior.  The new cab had 1100 square inches of windshield glass and was dubbed "the 1100 series" cab.  This cab was used on all Peterbilt conventionals after the end of 1972. 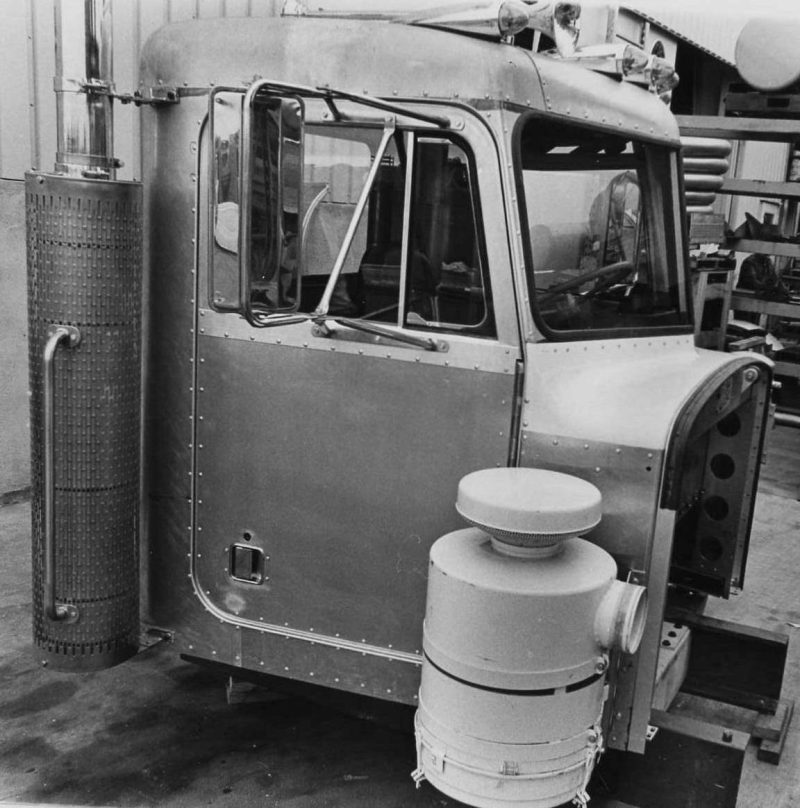 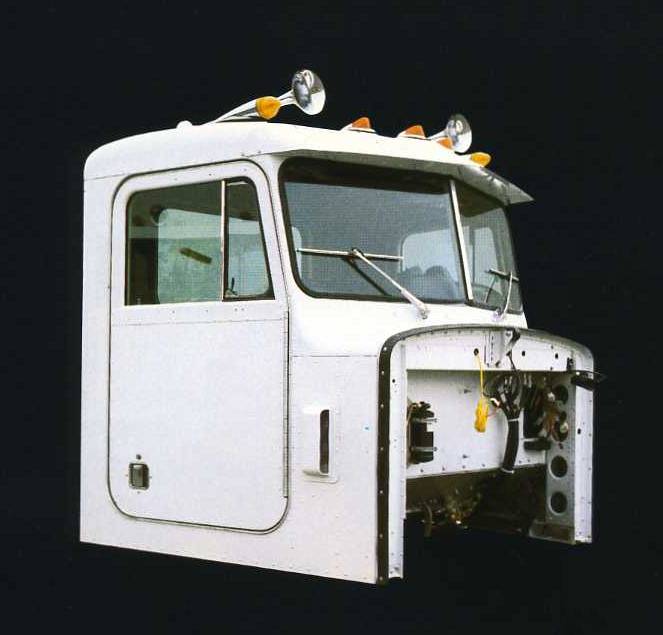 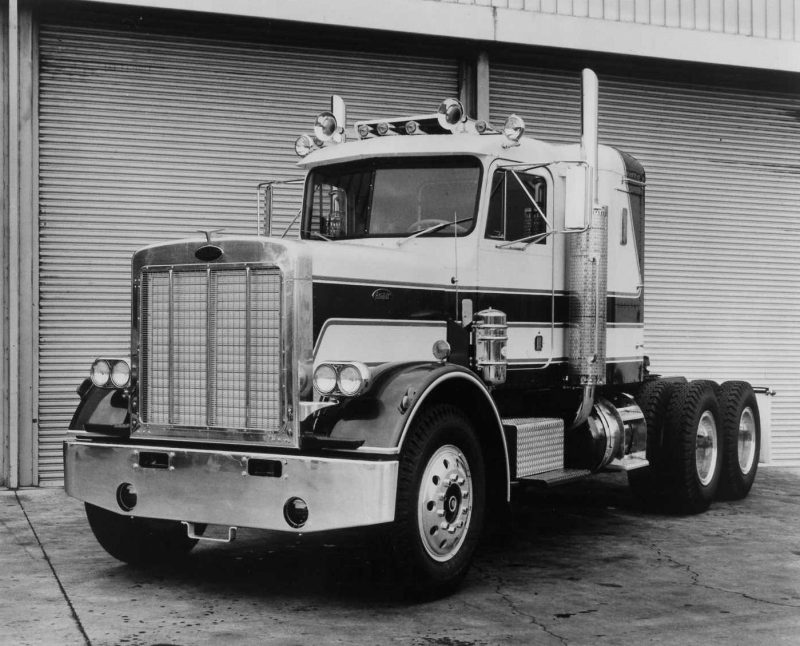 The 1st 1100 series 359.  Changes with the new cab included new doors, glass, visor, low profile roof air conditioner units, diagonal mirror braces attaching to the mirrors not the doors and a taller sleeper.  The sleeper gained height to match the height of the cab.  The additional 4 inches was made up with a panel above the bunk doors, a grab rail attached to the panel assisted in entry/exit to the sleeper.  Other changes included a straight windshield pillar, rounded door corners, low-mount paddle/style door releases and a molded plastic dash cover.  Early 1100 cab 359's were only available with a molded headliner.  An upholstered headliner was available in the mid 70s. Photo courtesy of Peterbilt Motors Company. 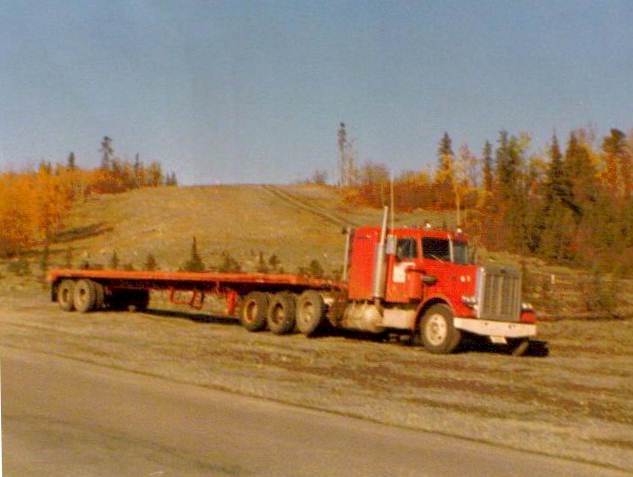 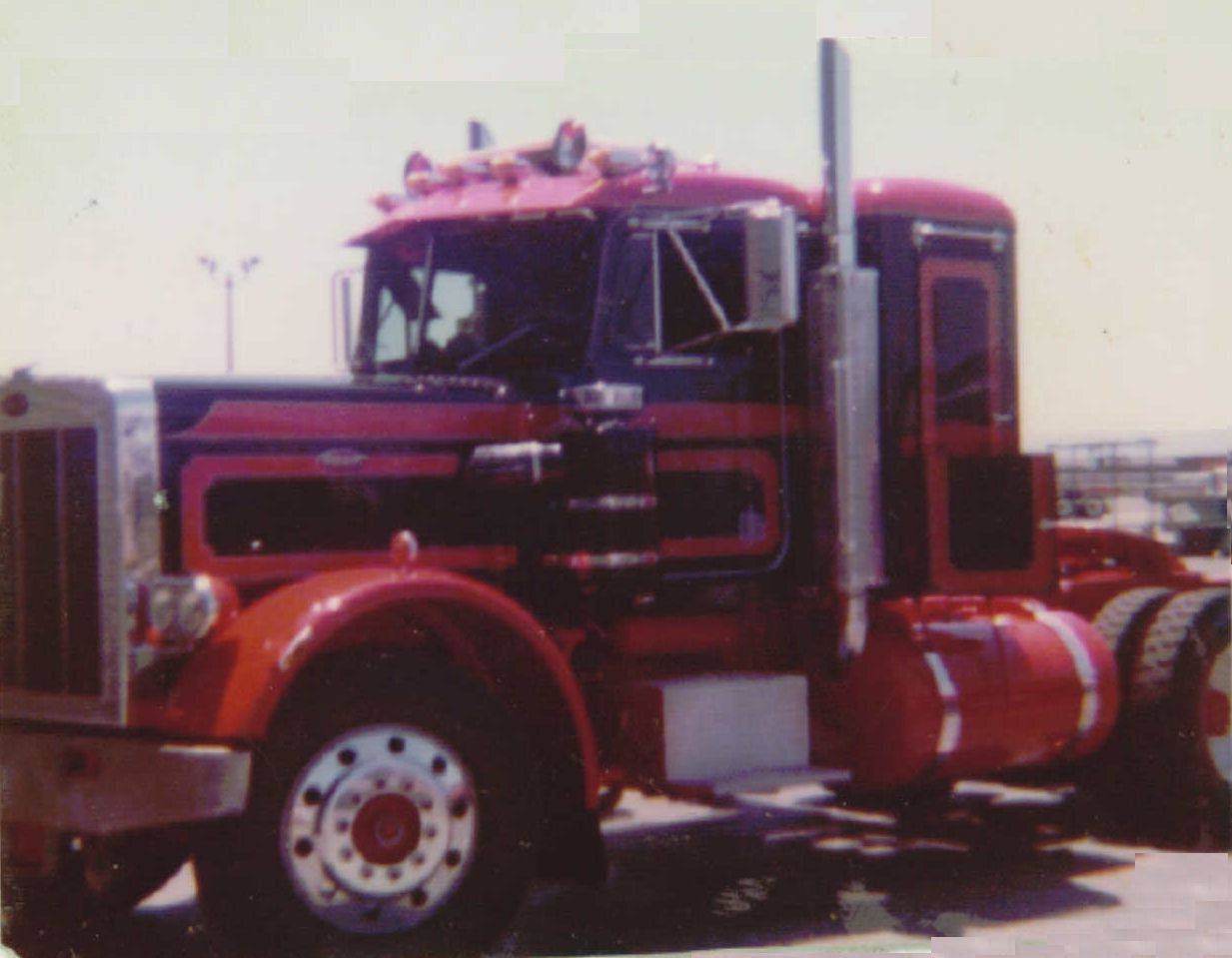 This 359 displays the sleeker fender mounted marker light as well as dual air cleaners which were rare in 1975.